Between 1846 and 1869 over 500,000 emigrants used what today are called the Emigrant Trails to cross the vast plains of America. Most were searching for a better life, and some were just searching for gold. It is estimated that one tenth of these early emigrants died of disease, dehydration and starvation along the harsh six month long journey. It was a slow pace with horse or oxen driven wagons making about twenty to thirty kilometers per day. 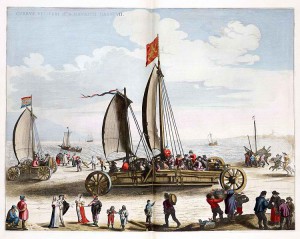 There was one innovative man who looked out across the rolling hills of the plains, and decided that there should be an alternative to the horse drawn wagon. He had a vision to use the wind to cross the plains in a wagon with sails, and soon became known as Wind Wagon Thomas. After proving he could sail a small wind wagon, in record time, to a town located 300 miles away, he established the Prairie Clipper Company, which would offer passengers a sailing journey across the plains on a magnificent “Prairie Clipper Company”. Thomas quickly had local businessmen investing in his Prairie Clipper Company, but as most visionaries he did not spend enough time with the details.  There was brisk wind on the day of the maiden voyage, and the wind wagon managed to reach speeds of thirty to forty kilometer per hour. Unfortunately for Thomas the ball bearing and shock absorber had not yet been invented, and soon the wheels hubs were smoking and the mechanical integrity of the ship was being shaken so badly that the steering mechanism began to malfunction. At this point, the investors who had been invited on the prestigious maiden voyage began to literally make a hasty exit from their promising investment – several broke arms or legs. Although he was not able to control the huge craft alone, Tomas stayed with his Wind Wagon, like any good captain, until it went down, capsizing in the desert and limped home again to face his shame – and some very angry investors.

A few other visionary land sailors came after Thomas. The most notable was Pepprad who manage to sail his Wind Wagon all the way to Colorado in record time only to be caught in a twister a mere fifty miles from his final destination. His wind wagon was lifted four meters in the air and dropped again breaking the back axel. The railroad finally made its entry in 1863 and brought an end to the wagon trains and further development of the wind wagon.